Is technology bad for the environment?

By buzzpoint-admin23 January 2020 No Comments

Global warming and protecting the environment have been a hot topic recently. Facts show the warming effect of the earth is increasing rapidly and much more than most scientists have ever predicted. There are lots of discussions on global warming and whether it is real or not, but looking at the hard facts and details from scientists it is very hard to ignore. There are the obvious causes to global warming like vehicle emissions, plastic waste, production emissions, burning fossil fuels, power stations and many more. But have you ever considered how the technology you use at home or at work like computers, smartphones and the internet could also have adverse effects on the environment?

The first and most obvious thing is the energy that technology uses. Whether that be the vast amount of power that online web servers use, right down to the smallest thing like charging your phone. The amount of energy this uses can be bad for the environment if it is not from a renewable energy source, burning fossil fuels like coal for example. Also you may not think that something like the internet uses a lot of power, but every Google search that you make produces carbon emissions. Recent figures show that the average of 3.5 billion Google searches per day account to 40% of the Internets whole carbon footprint. And 2 Google searches are equivalent to boiling a kettle. But how can that be when you can’t even see the internet? Well, for the internet and web services to work and run it requires huge datacentres which use vast amounts of power to keep them running. The power these datacentres use is often generated by burning fossil fuels which produces Carbon Dioxide (CO2) which is one of the main greenhouse gasses attributed to causing global warming. So every website or app you use online is most likely producing some sort of emissions, and even sending a text message also uses a datacentre having the same effect. 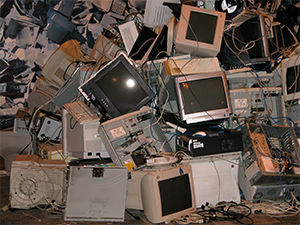 Another thing to take into account is the environmental waste produced once a device like your smartphone or computer reaches the end of it’s life. I’m sure like many other people you either just throw away your old phone or it ends up going to that one draw in your house where all the other old phones go to die. Throwing devices away in general waste is extremely bad because the majority of it goes into landfill and if the lithium batteries used in smartphones are damaged they give off highly toxic gas. It is estimated that the EU only recycles around 5% of lithium batteries so this is a real risk. Also a lot of computers and smartphones use plastics, and if not recycled correctly they are also bad for the environment. You may have heard it in the news about other industries like one use plastics, but it is very bad for the environment if plastic gets into the sea and can damage ecosystems.

As well as having an effect on the environment after they are disposed of, the way Lithium batteries are made can also be harmful for the environment. Lithium is a natural resource which requires mining to extract it from the ground and some of the side effects of this process include water pollution, air pollution and it can also harm soil in the area of mining. There are many examples of this around the world in areas like Chile where there have been reports of rivers being contaminated and having an unnatural blue colour to them due to the mining of lithium. A case in 2016 in the Tibetan plateau found hundreds of dead fish had been poisoned by the waste produced by a nearby lithium mine. And as you know smartphone batteries don’t last forever, so the demand for this resource is only going to get bigger.

Obviously the above is all quite worrying, but there are ways we can reduce the effect that technology has on the environment, and lots of companies are already taking action to combat climate change.

Recycling lithium batteries is quite a complex issue. At the moment the small amount of batteries that are recycled are shredded and separated into a mix of metals to be used again, but this method does waste a lot of lithium. Lithium is a finite natural resource and the charge of the batteries produced will also eventually run out so making the most of the available resources is vital. It is currently being looked into to recycle old batteries from electric cars in smartphone production. So even though the old batteries are no longer powerful enough for the car, they will still be more than adequate enough to power a smartphone. Currently UK researchers are looking into alternative techniques for when a battery completely reaches the end of it’s life. One idea is biological recycling which uses bacteria to process the materials, and hydrometallurgical methods, which we are not going to try and explain, but put basically is similar to the way that lithium is manufactured, but the opposite way round, converting it into a relatively safe material. So, although there are negatives to using lithium for batteries, if production and recycling are improved it could be sustainable for the environment. Also a lot of companies are being more conscious about where the lithium they are using in batteries is coming from to make sure it is extracted safely without damaging the environment as well as making sure the working conditions for people working at these plants are safe.

It is also possible to recycle old computers and laptops. There are lots of charities and also local councils who offer computer recycling services. The way this works is they take apart your old computer, sort out the parts that can be reused, recycle the materials that can be recycled like plastics and metals, and then any components that can’t be reused are disposed of so that they have the least negative effect on the environment as possible. So, before you throw away an old laptop or PC, have a look into the local recycling places near you. Big companies like Google have recently announced that they are 100% carbon neutral, meaning that any emissions they do produce are counter balanced by things such as using renewable energy and planting trees to help reduce CO2 levels. As well as companies improving their carbon footprint, you at home and at work can also make small changes to help reduce climate change. Although it might be hard to go completely carbon neutral, you can do the smallest of things like turning your computer off at the end of the day or when you are not using it, switching the plug off once your phone has fully charged and also turning devices like radios and TV’s off completely once you have finished using them instead of putting them on standby. Also, if you are feeling really eco-friendly, why not install solar panels or another type of renewable energy source to power your technology?

Obviously in the grand scheme of things technology is a small contributor to global warming when compared to all other industries. But, even making one small change will count towards saving the environment.